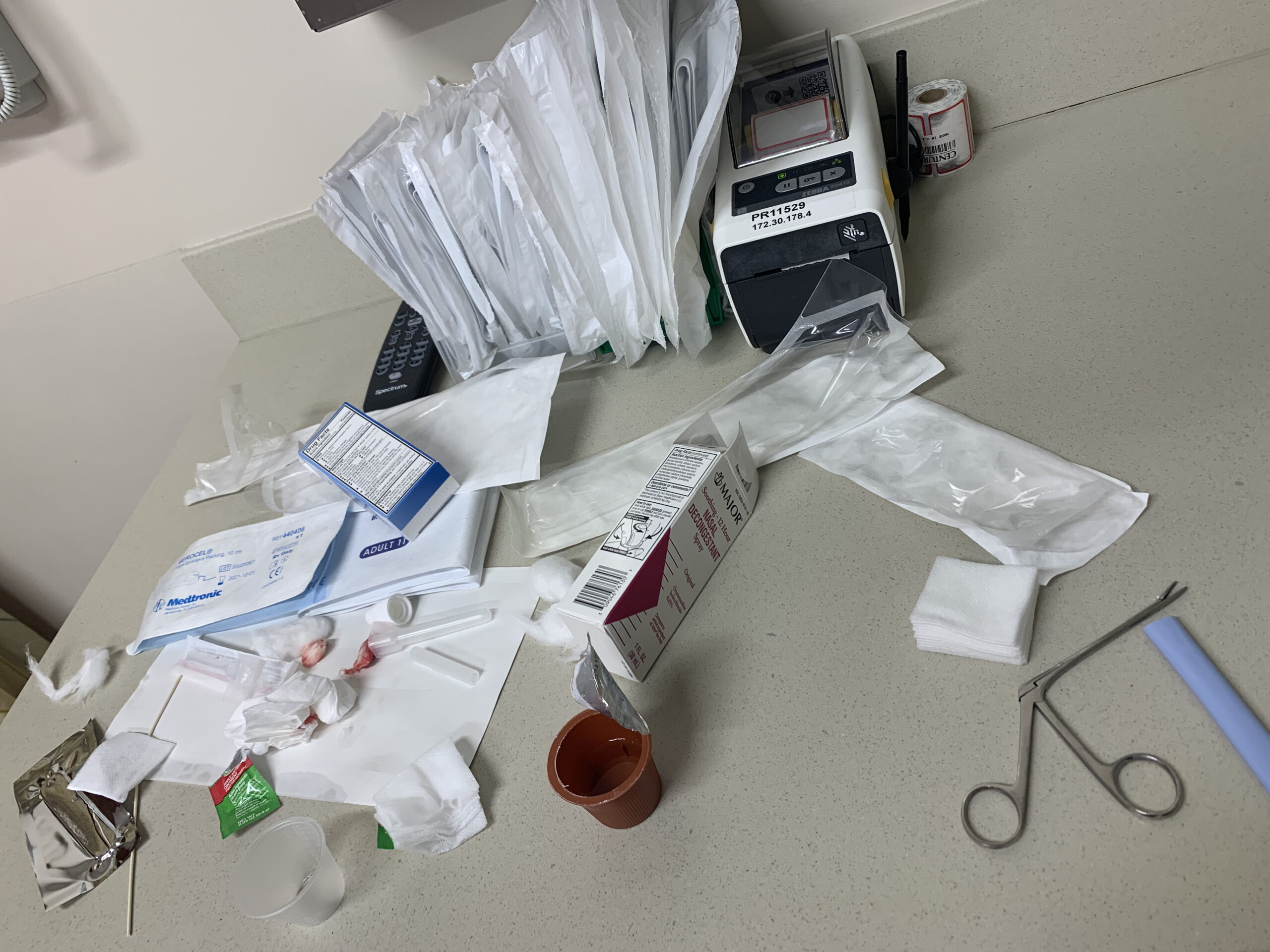 I recently lost an entire weekend – and a lot of blood – to an unstoppable, 7-hour nosebleed.

This was my first-ever nosebleed and it happened to quite serious, even requiring an ER visit.

Before this happened, I didn’t know much about epistaxis – the medical word for nosebleeds – but I’ve learned a lot in a short time.

After hearing my nightmare story, I think you’ll want to go out of your way to avoid a nosebleed.

Here is my cautionary tale about how to prevent nosebleeds in wintertime.

Note that if you’re at all squeamish about medical details or gory stories, you may want to skip this one.

I woke in the wee hours of Saturday morning, which is not unusual for me. What is unusual, however, is that I awoke to copious amounts of warm, salty liquid running down the back of my throat. I became immediately, horribly aware that it must be blood.

I grabbed a handful of tissues, shoved them under my nose and ran to the bathroom. When I turned on the light, I thought for sure I must be in a horror movie or nightmare. Blood was pouring from my nose and rapidly soaking the tissues I held to my face. When I spat a mouthful of liquid into the sink, that too was nothing but blood. As the kids say: I was shook.

I sat in the bathroom on the edge of the tub for what felt like hours, pinching my nose tightly and holding tissues to my nostrils.

When I tilted my head back, which is what people in movies do when they have a nosebleed, blood ran down my throat and nauseated me. After googling what to do for a nosebleed, I learned that you’re actually supposed to tilt your head forward slightly so this doesn’t happen.

Everything I read online said the nosebleed would stop after 30 minutes of gentle pressure. But mine didn’t. By about 4:30 am I had a 30-minute timer going and I had let it run and reset it about three times. My nose was still bleeding.

I decided that, in addition to pinching it and shoving tissues up my nose, I also needed to sit quietly and slow my heartrate. I sat in the glider chair in our room and practiced deep, slow breaths while holding my nose tight.

At about 7 am, E opened his eyes and asked, “is that you sitting over there!?” as this is not normal behavior. I said yes, and that I have a concerning nosebleed. He mumbled “wow” and drifted back to sleep.

By this time, I knew I needed to go to the ER. My nosebleed had slowed down, but it was definitely still bleeding and not stopping. I didn’t have the heart to wake up E and Z early, so I just kept holding onto my nose and telling myself “it’s okay, you’re not dying, they’ll wake up soon”

In hindsight, this was a bit nuts and I should have woken them up at 7 am and headed to the ER earlier. I could have saved myself a lot of blood loss. Instead, I moved down to the living room and sat in a more comfortable chair, continuing my deep slow breaths and the nose pinching.

A little before 10 am, Z woke up and came to find me. She found me sitting in our recliner surrounded by bloody tissues. She yelled to E that he had to wake up and come help me. I explained the situation to them both and calmly said I needed to go to the ER.

I don’t think they got the gravity of the situation, because they both suggested I take a shower first – apparently my face was a bloody mess (I’m not surprised). I wasn’t thinking clearly, so I followed their advice. I got in the shower and immediately realized it was a huge mistake. The act of walking upstairs and getting undressed had started my nosebleed gushing again.

In the shower, my nose poured blood as the water rained down around me. I gently blew my nose in the water and huge clots flowed out, further increasing the gush of bright red blood. It was a horror show.

Somehow I pinched my nose shut with one hand, shut off the water and got out. I tried to dry myself off one-handed as best I could, but I had to call for assistance to get dressed. My nose was in full geyser mode. The bathroom looked like a crime scene.

Z came in to help me get dressed and watched in shock and horror as I leaned over the sink to spit out a mouthful of blood. I let go of my nose for a moment to adjust my towel and blood jetted out into the sink, splashing the counter. At that point, she turned white and SCREAMED for E, and he came running. Finally, they knew I was right: I needed to be at the ER, pronto.

They got me dressed, downstairs and into the car. Z stayed at home while E rushed me to the closest ER. Alas, because of Covid, he had to stay outside in the car while I went in alone.

The good folks at the OhioHealth ER in Lewis Center got me in right away with no wait, and they put me right at ease. “We will get that bleeding stopped, don’t worry!” they said. “We have several tricks and one of them is sure to work.”

I wasn’t thrilled at the idea of what these tricks might be. I hadn’t googled “ER treatments for nosebleeds” and that’s probably a good thing. The first couple weren’t too bad: nasal spray directly up the nose, and nasal spray-soaked cotton wads packed way up inside the nose.

Those slowed the bleeding (as did me sitting still and doing my breathing), but did not stop it. The doc then looked up my nose with a scope to see if he could spot the gusher. If he could see it, then he’d chemically cauterize it as a next step. That didn’t sound fun, but I was ready to stop bleeding.

Unfortunately, he couldn’t see the blood vessel in question, so the next step was to insert a Rapid Rhino catheter-like balloon up my nose and gently inflate it. That would apply pressure internally to stop the bleeding, since obviously applying pressure externally wasn’t cutting it (I had now been pinching my nose shut for more than seven hours straight).

I’m not going to lie, the balloon insertion process was not fun. They did numb up my nasal passages beforehand with a cooling gel, but it still felt like being brain-probed by an alien. Inflating the balloon once it was up inside my nose made my head feel over-stuffed and uncomfortable, but not painful per se.

During this time, I felt pressure and discomfort up inside my nose and head, plus a little bit of stinging pain on the right nostril (which was odd because the device went up my left nostril). I also began to feel a nagging ache in my upper row of teeth. But, no more bleeding!

The ER doc was great and told me I could remove the Rapid Rhino device myself in two to three days. He told me to spray saline up my nose to moisten it, then deflate the balloon using a syringe he gave me, and then pull it out. It seemed daunting but I had two to three days to get my courage up.

Once home, I felt fine for the most part – other than being fatigued, weak and wobbly all weekend from all the blood loss. The tube hanging out of my face was a great excuse to lay around, eat whatever I wanted and binge-watch Netflix.

I do not miss that nose tube, which I affectionately called my snorkel. It was rather grotesque and hideous, but it honestly didn’t bother me much and certainly didn’t stop me from taking selfies.

My family was amazing and took great care of me. Z drew the incredible cartoon above, which cracks me up every time I look at it. Even our dog and cat were extremely sweet and loving with me during my recovery weekend.

On Monday, at the advice of a dear nurse friend, I spend a good long time in a hot shower to get the bathroom and my nose nice and steamy and lubricated. Then I removed the air from the balloon and gently pulled that odd, alien device out of my nasal cavity. It didn’t hurt a bit – and most important of all, I continued to have no bleeding from my nose!

For several hours after, my head felt strangely empty, echoey and cavernous. It was like moving out of a house and realizing how big and empty things are without furniture.

I have a whole new appreciation for the spacious caverns up inside our faces. We think of our noses as these relatively small things, but actually there are multiple entire rooms inside our face behind our noses. It’s crazy!

How to avoid a nosebleed in winter

If you’ve read this far, you’re a real trooper. This blog post is almost as long as my nosebleed was. But seriously, the ER folks told me that nosebleeds are very common in winter when the air is so dry – especially in folks over 45.

Apparently, most nosebleeds are vascular and stop easily with gentle pressure, while a few others are arterial and will always need medical attention to get the bleeding stopped. Lucky me, I had an arterial gusher for my very first time. But at least now I know what to do!

I’d love to hear your nosebleed stories in the comments below or over on Facebook. Above all, stay calm if your nose starts to bleed – and for heaven’s sake, if it won’t stop after 30 minutes or so of pressure, wake your family up! No one should have to bleed alone. 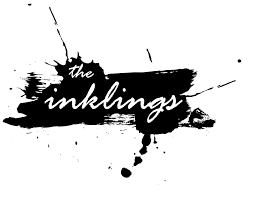 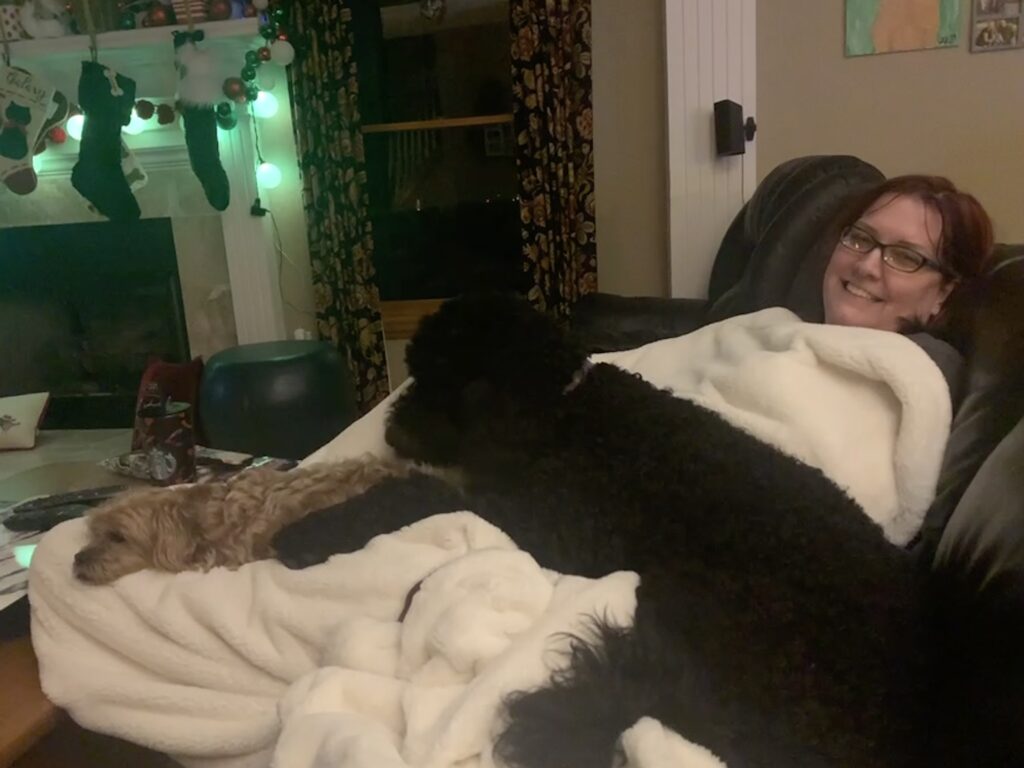 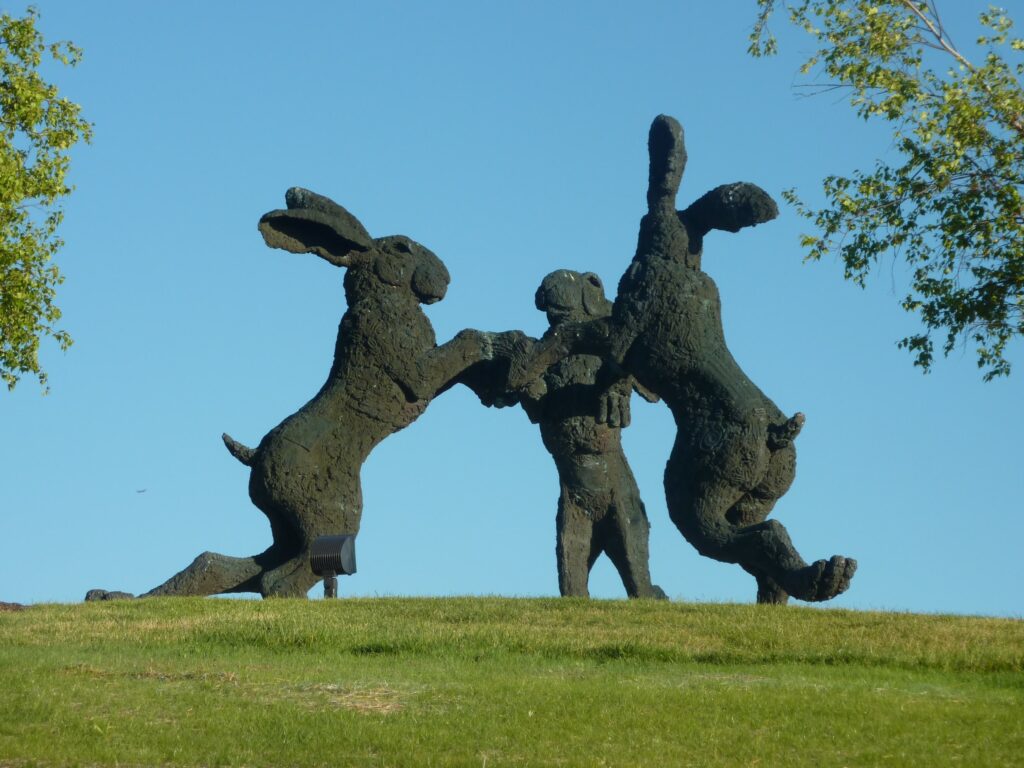