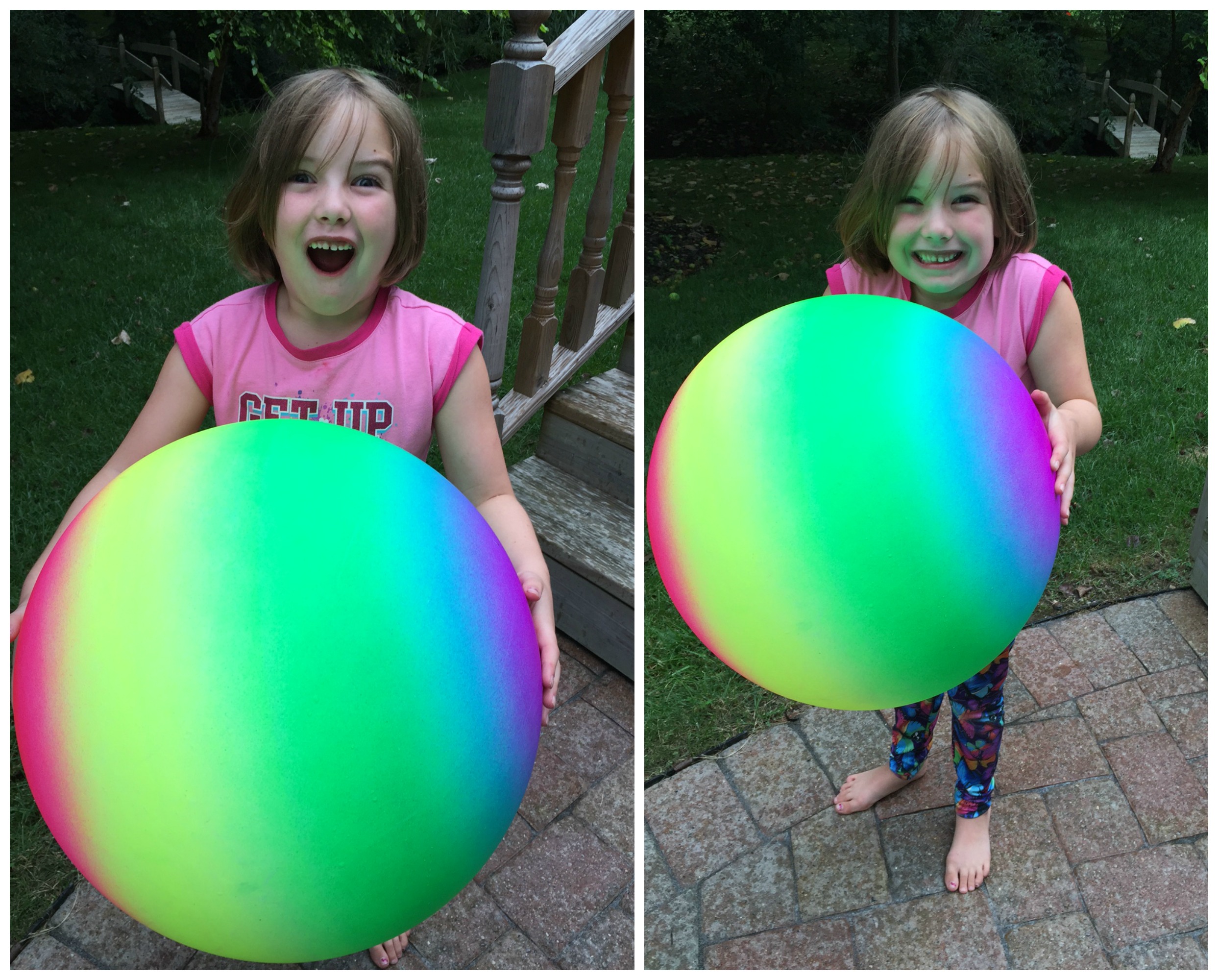 Our little family of three just had a wonderful getaway to Sandusky, Ohio, including a day at Cedar Point and Soak City and an overnight stay at Castaway Bay. We loved all of the above! I’ll blog about it all soon.

For now, I just want to tell you a story about one part of our happy end-of-summer, pre-back-to-school getaway. It’s a story about an awesome rainbow ball and the power of childhood magic.

We surprised Zoe with a weekend away to celebrate the end of summer and give her a good send-off to first grade. During the two-hour drive from our house to Sandusky, we told her where we were going and she became more and more excited. When we got there and checked in, Castaway Bay did not disappoint. The huge, brightly colored water slide tubes protruding from the hotel let you know right out of the gate that this is a FUN place.

Zoe loved our room and lakefront view, she loved our hotel with its tropical theme, and she was STOKED to go to the indoor water park! We quickly put our swimsuits on and headed down… but just outside the entrance to the water park was the dreaded arcade.

I say “dreaded” because my hubby and I are in agreement that those arcade games are a rip-off and a waste of money. But there, in the central place of honor and all lit up like a dream, was a GIGANTIC claw machine filled with the most amazing, stupendous, resplendent rainbow bouncy balls. Z’s eyes grew to the size of pinwheels and her mouth dropped open.

“I have to win one of those rainbow balls!” she uttered dreamily. The balls were pretty awesome – but E and I, in unison, said no way. We’re going to the water park! Stay focused! One kind of fun at a time, and besides, those machines are a total scam!

She allowed us to dissuade her, but the die was cast. After an amazing couple of hours in the water park (we loved it! More in a future blog post), she again was drawn to wander into the arcade and right up to the rainbow ball claw machine from hell.

“Please! PLEASE! Please please please!” she begged, but we were unified in our reply: No. Not now, not later – those machines don’t pay out. You’ll lose your money and win nothing. It’s a waste of time and money and energy. Nothing good will come of it.

We convinced her again to see reason and come with us, but she couldn’t get the giant bouncy rainbow ball out of her mind. To make matters worse, later at the hotel, we saw a kid running around with one – so the machine MUST pay out occasionally. She begged us to take her back down to the arcade, but we held strong. We all had a great day despite rain and a dearth of giant rainbow bouncy balls.

The next morning at breakfast, Z asked politely and fetchingly if she could have just one chance to try for the giant rainbow bouncy ball. The prior day, she had tried a much smaller, cheaper claw machine and “won” (aka got one tiny measly piece of candy after putting a $1 in – total rip off!) so she got a taste for how it works. She was convinced she could win the giant, beautiful, amazing rainbow ball. She told us it would be the most perfect souvenir of our trip. And that we had taught her to work hard and try hard at everything.

We were checking out of the hotel so this was her last chance, plus we are suckers for a well-spoken and adorably delivered argument, so we agreed she could have not one but TWO chances. We never thought for a second she’d win it, but we knew that otherwise, we were literally never going to get her to stop thinking about the ball and wondering if she could have won it. Plus sometimes in life, you do have to try even if the odds seem impossibly insurmountable.

When we got into the arcade, there was the machine full of incredible rainbow balls – and there was another family walking around with one! They said it had been pretty easy to win, so our hopes rose. But, there was also another woman in front of the machine looking frustrated. She had tried “more times than I’d like to admit!” and hadn’t won one yet… so our hopes sank.

Nonetheless, we loaded up Z’s arcade card with enough money for two tries and we headed to the rainbow ball claw machine. Z put her hands on the controls and then asked E if he would do it for her. “I know you can win it, Daddy!” she said. He carefully went for the first shot and it looked close, but of course the ball dropped out of the claw. The ball always drops out of the claw!

She had one try left. There was ZERO chance we were going to reload the card and let her waste any more money on that darn thing – this was it. She again asked E to take the controls and try to win it. She focused all her positive energy on the rainbow balls and that darn claw. She BELIEVED she would win the rainbow ball of her dreams.

Time slowed down. It felt like a dream or a movie. E worked the controls masterfully, the claw angle looked perfect. It lowered down and grasped one of the gorgeous, colorful rainbow balls. It raised back up… and it held! The ball was on its way to the shute!

I held my breath. Zoe held her breath. I was convinced the ball would drop off just at the last second before it got over the shute. But no… it actually dropped into the shute. E had done it! Zoe raised the door and gently eased out her giant rainbow ball and immediately began to hug it, glowing and crowing with happiness. “You did it, Daddy! You did it!!” 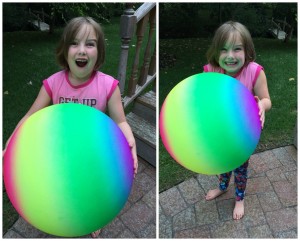 And that, my friends, is the story of the beautiful rainbow bouncy ball. Should we have given in to her demands and begging and pleading? Probably not. Did she need a giant rainbow ball in her life? Who can say, but most likely not. Is E a total rockstar and hero for the rest of his days after this big win? Hells yes.

And is there pure, real magic in a little girl falling in love with a giant, glowing rainbow bouncy ball… powerful childhood magic made of hope and dreams and summertime that can win over and vanquish even the most evil, twisted, money-stealing, arcade claw machine?

All hail the amazingly awesome rainbow ball and the magic that made it possible. 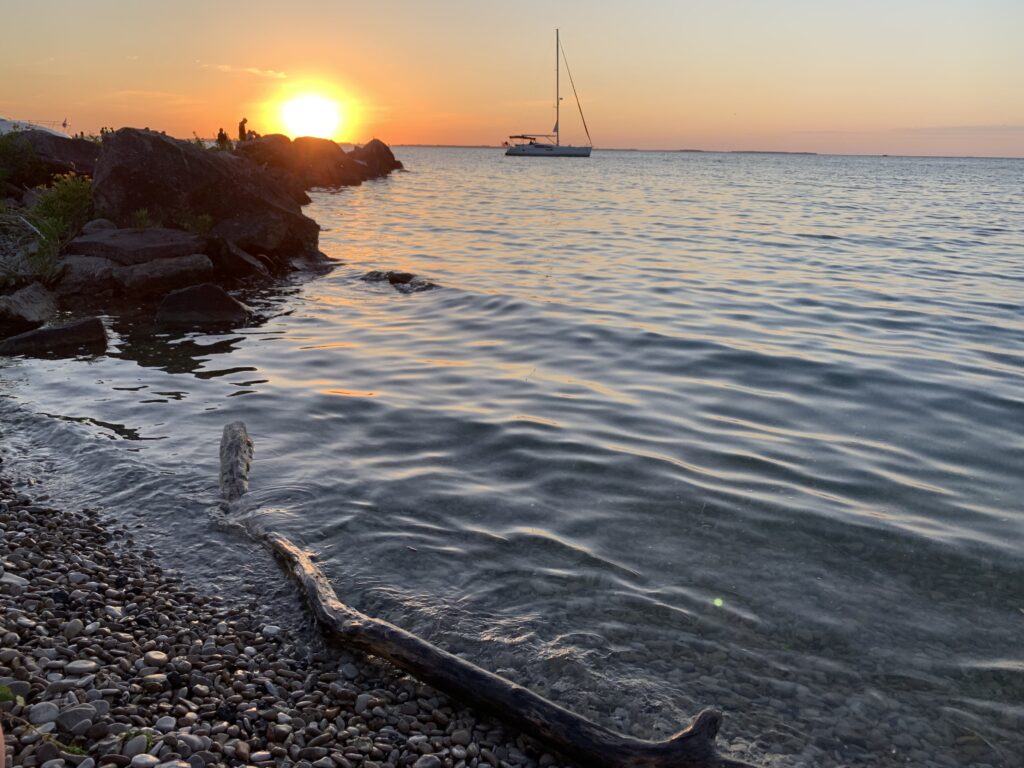 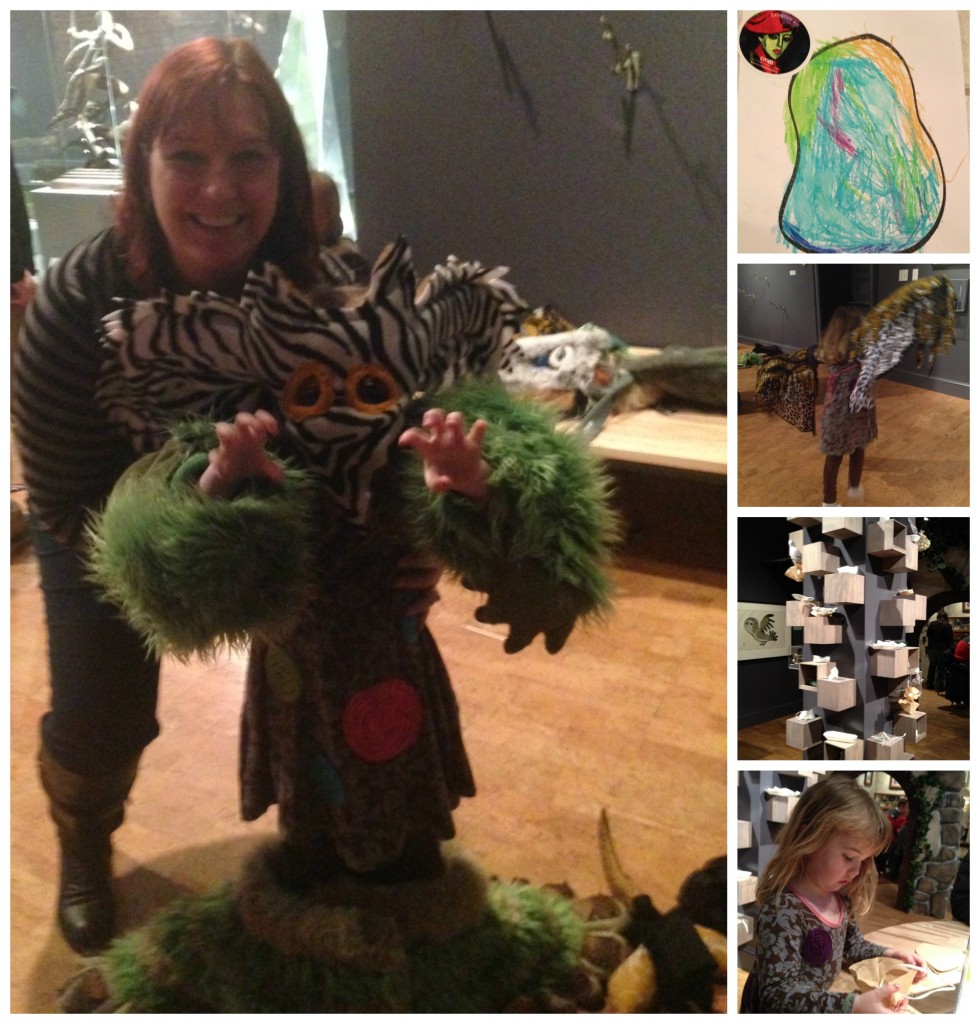 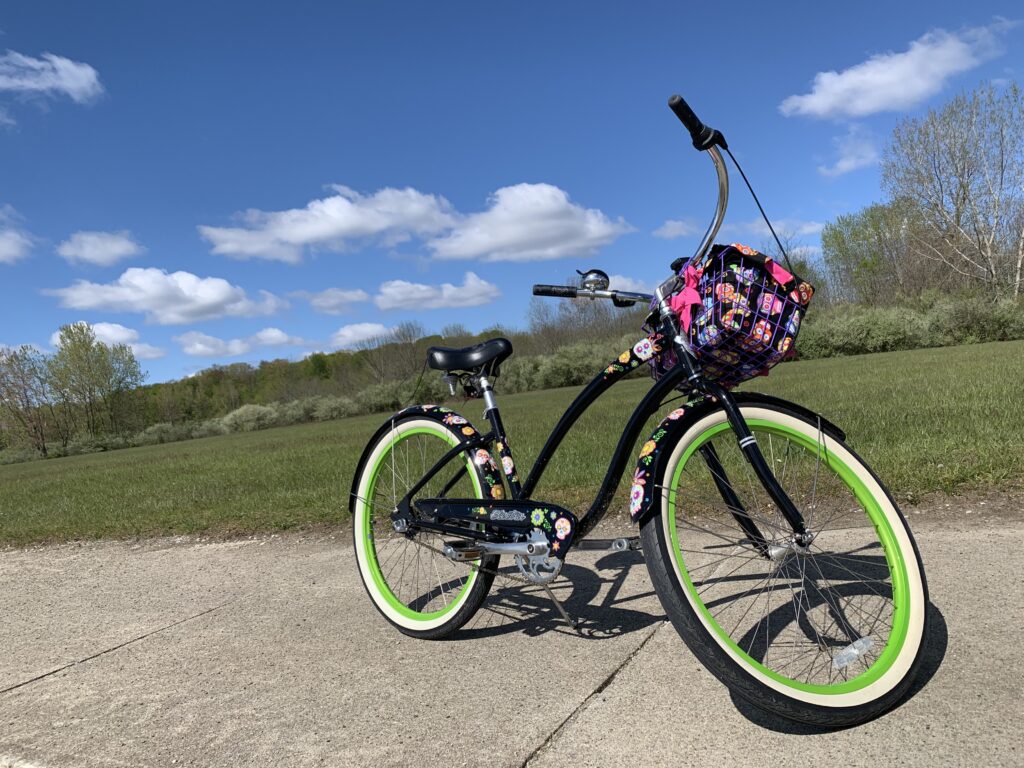