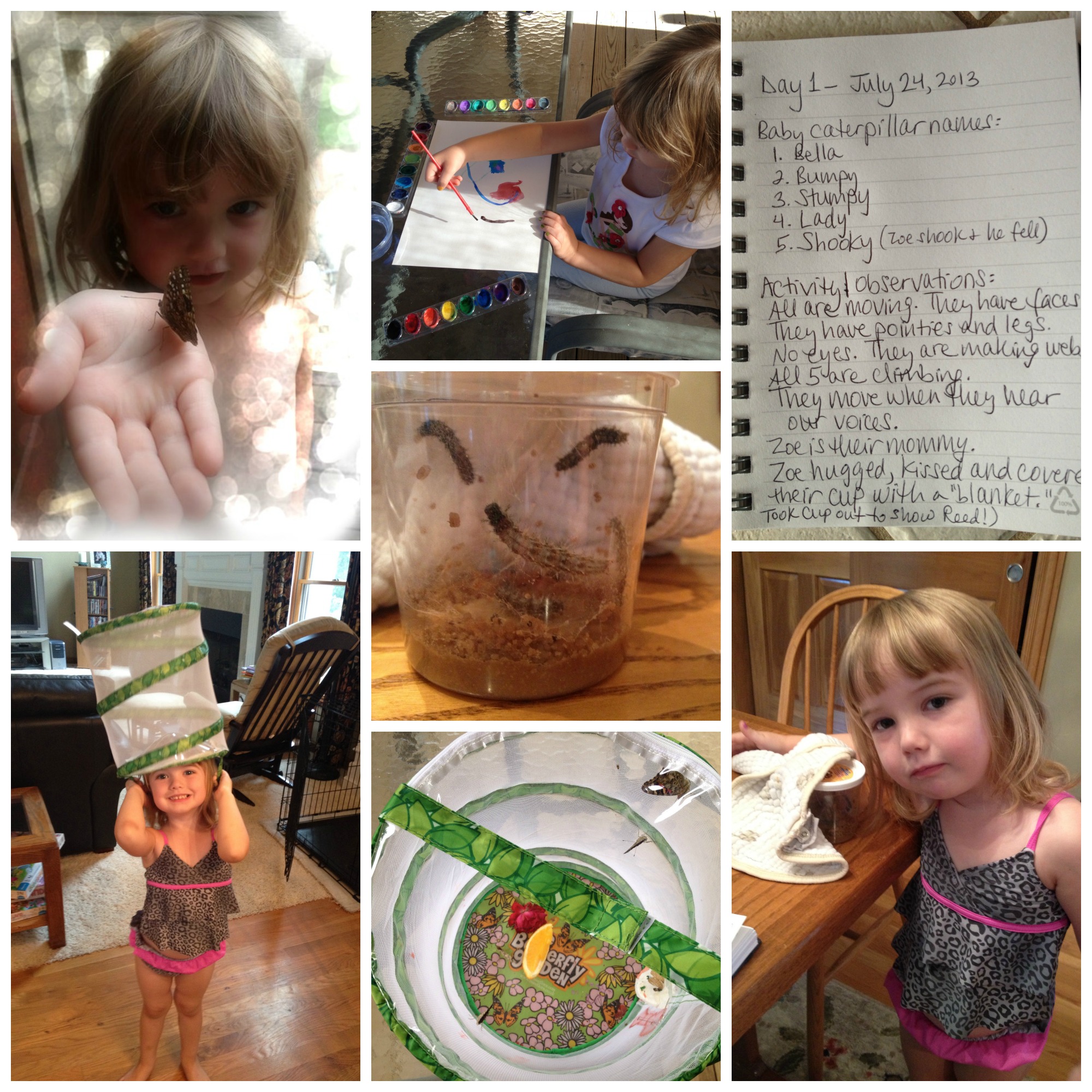 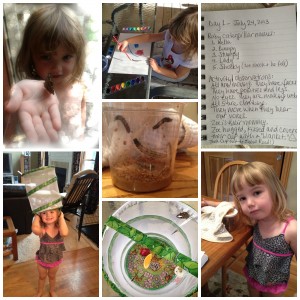 This summer, I did something I never thought I’d do: I invited five live, wiggly insects into my house, cared for them, and treated them like treasured members of the family. Somewhere in another life, the old, pre-kid me was screaming in horror the entire time. The things we do for our little ones!

But in all seriousness, the butterfly experiment – having caterpillars arrive on the doorstep and nurturing them as they turn into chrysalids and then ultimately hatch as newborn butterflies – was educational, inspiring and amazing. If you can’t find baby caterpillars in your back yard (or simply want a more controlled way of doing this), I highly recommend the Insect Lore Live Butterfly Pavilion (less than $12 from Amazon, plus $5 for the live caterpillars once you’re ready to have them arrive at your door).

Now, allow me to share some of our butterfly experiment highlights with you, thanks to a “caterpillar journal” Zoe and I decorated and updated throughout the two week journey this summer.

The caterpillars arrived on one of those uber-hot summer days that makes you wonder how a living creature can survive inside a plastic cup and cardboard box. In fact, for a little while I was terrified they had not survived the journey – but they had! Soon, all five started moving and doing their caterpillar thing. I was a bit alarmed that it would not be love at first sight for Zoe, since Painted Lady caterpillars are not particularly cute (in fact, if I’m being honest, they were pretty ugly). I needn’t have worried: she adored them on sight.

From the moment those little wrigglers entered our home, Zoe doted on them as if she were their mama. She called them her babies, covered their plastic cup with a little blanket at night, and basically loved everything about them. Even though other bugs outside might be “gross” or “ucky,” these guys were her babies. It was fun seeing her be so nurturing with them. We started our caterpillar journal the day they arrived – the writing is mine but the words are all Zoe. She named them, she loved “observing” them and making notes about them with me as scribe, and most of all she loved drawing, painting and sculpting (from Play-Doh) her little “happy caterpillars.”

The product literature said three of the five were guaranteed to make it to the butterfly stage; I prayed all five would. I knew Zoe would be devastated if anything bad happened to any of her five babies!

After just a few days of waiting and watching the caterpillars eat and climb to their ceiling, then climb back down again, and basically scatter food all around their enclosure like tiny frat boys, the five moved to the ceiling of their cup and began to turn into suspended chrysalids. Two went first, with the other three changing a day or so later. It was pretty cool to see and it makes you realize how truly badass caterpillars are. For example, two of ours decorated their chrysalids with their shed skulls. Yep, you read that right. Caterpillars shed their exo-skeletons when they go into those chysalids. They take only their soft insides – that’s why the chrysalids often look smaller than the caterpillars themselves. It’s because they leave their “bones” outside. Most of that drops to the bottom, but like I said – two of ours had rather macabre decorations dangling from their crysalids. Zoe asked “are those the caterpillars’ heads?!” and I had to explain that yes, it kind of was… but that they were okay in there, too.

I know we all experience stresses in our life – emotional, physical, etc. But let’s for one moment imagine having to SHED OUR EXOSKELETON as part of our normal growth and development. You wrapping your minds around that? Because for me, it was one of the most unbelievable insights of this whole thing. Caterpillars are bad mothers.

Once the little wrigglers became boring, dangling chrysalids and we had to be sure to never move the cup, Zoe lost a little bit of interest in talking to them or spending time with them. She knew those small, still chrysalids were going to turn into butterflies but it’s all a bit hard to wrap your mind around. Summer went on, we had fun outside, and we stopped journaling every day. But of course, E and I kept checking on the caterpillars once or twice a day to make sure there were no changes. It’s amazing how still and silent metamorphosis is, when you think about all that is raging and roiling inside. And then, suddenly overnight, we had emergence! This too was an insight – it’s a bloody process. Well, not blood maybe but a dark red liquid makes quite a mess when the butterflies emerge from their chrysalids. It’s actually called “meconium” just like when a baby is born. Go figure! Between the caterpillar skulls and the butterfly blood, this whole thing became way more metal than I ever could have imagined.

Zoe was pretty excited when the butterflies emerged but I wish we could have actually seen it. Ours all did it overnight while we were sleeping.

I thought the butterflies would be the coolest part, but for our family it was a bit anti-climactic. The product literature has all these great images of kids holding the butterflies before they fly away, but our butterflies said “peace out” and took off – literally. We enjoyed sprinkling the sugar water on their flowers and giving them slices of orange to lap at, but for the most part it always seemed like our butterflies wanted to get out and go. We didn’t keep them long – maybe a day or so – and then we took their carrier outside to let them go. I thought we’d have a few photo opps before they flew away, but we were not so lucky. They couldn’t wait to be gone! Fortunately, a couple of weeks later, we had a visit from a friendly butterfly who looked just like our Painted Lady friends, so I got a couple of shots of Zoe holding that one and we agreed it was one of our butterflies coming “home” to visit her mommy, Zoe.

In hindsight, it was a great experience and one we’ll definitely do again. Keeping the journal was great and hopefully next summer,  Zoe can do some of the writing herself! I love that she is still drawing happy caterpillars even though this all took place a month or so ago. And she certainly has a greater appreciation for both butterflies and caterpillars – as do I. If you had asked me five or ten years ago if I could ever see myself having bugs as temporary house pets, I’d have told you it was a stupid question and absolutely never going to happen. It’s amazing how kids change us!

So, what do you think – have you ever done a butterfly experiment in your home? Did you know caterpillars were so badass?! I’d love to hear in the comments below. 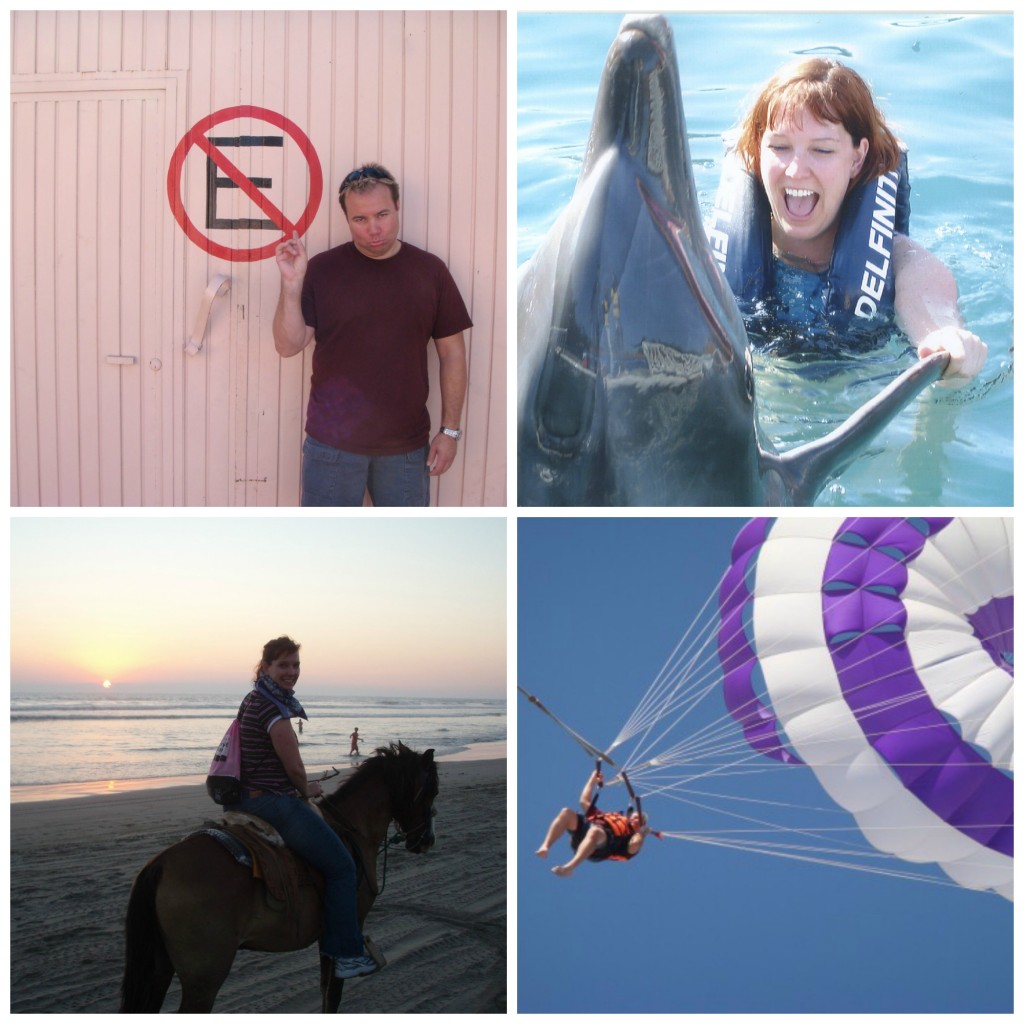 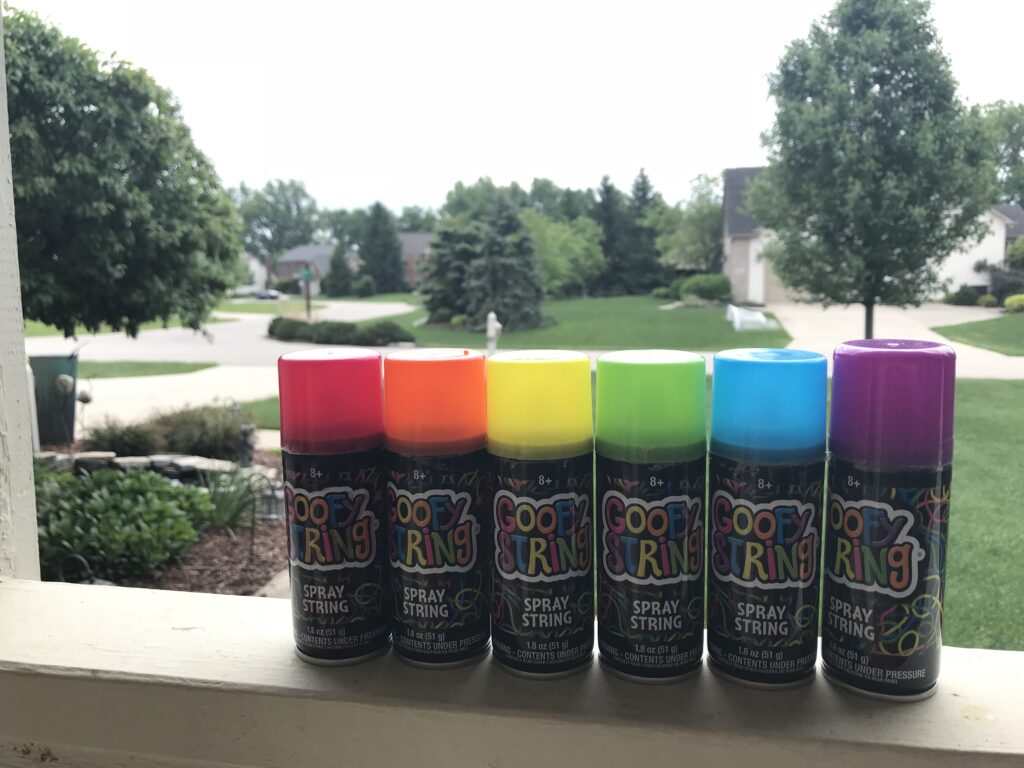