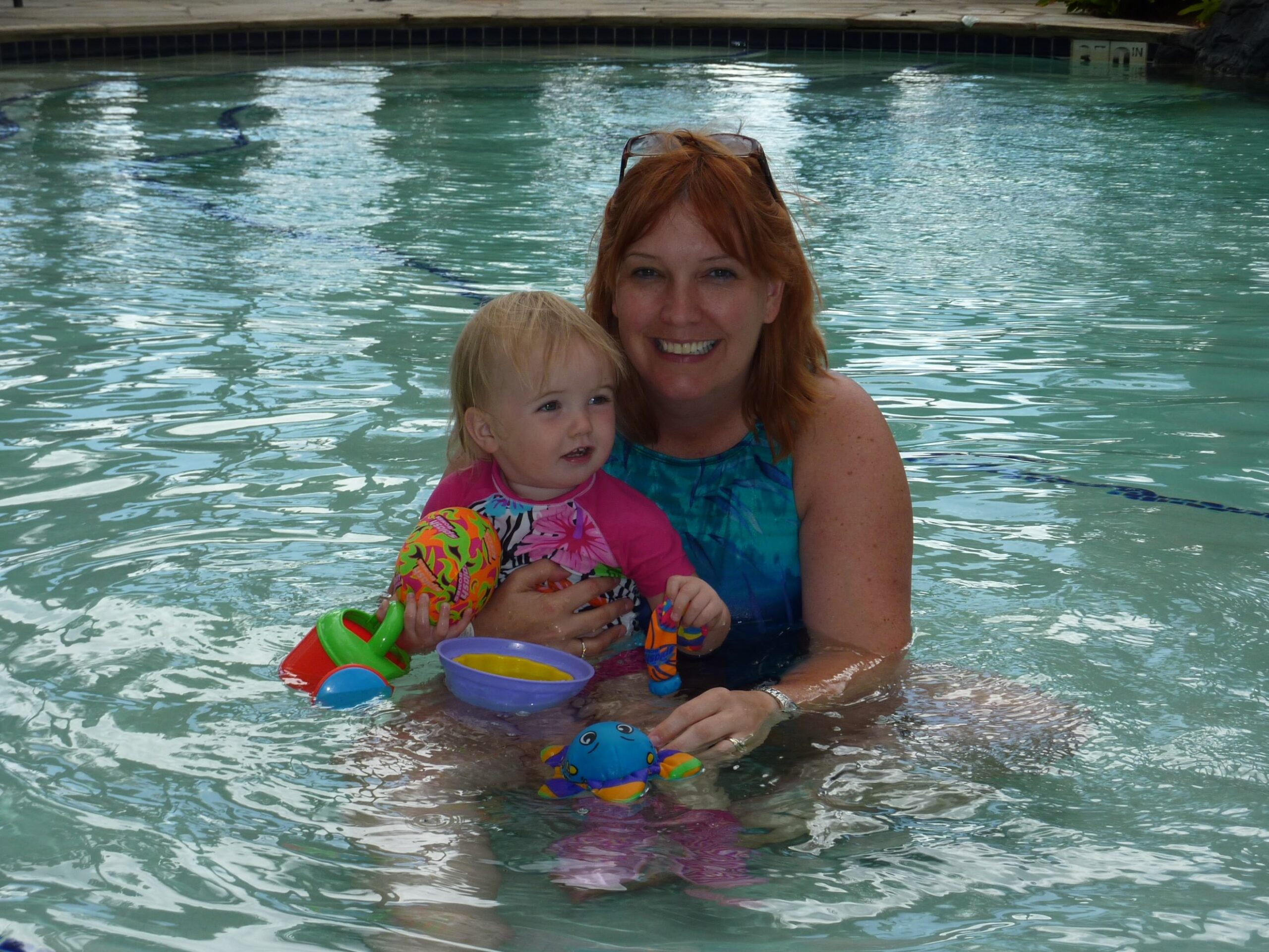 If there’s one thing we’ve done well as Z’s parents, it was encouraging her love of swimming and the water.

We started Z in “infant in arms” swim class as early as six months of age and continued to build on those lessons and skills throughout her childhood, not just in the summer but off-season as well.

Getting into the pool with your baby for mom & me swim class sometimes feels like a drag, but it’s the best way to build a love of the water in your little one. Sending them into lessons by themselves doesn’t have quite the same joy inherently built into the experience.

Encouraging independent play in the shallowest area of a pool by giving her tons of toys was one of our favorite vacation pastimes by the time Z was a year old. She felt like she was doing her own thing, yet there was always a loving adult within arm’s length of her – and when she inevitably fell over with a splash and we helped right her again, we did so in a way that normalized the experience and never made her feel afraid.

We always focused on joy in the water vs. technical skills. Continuing formal and informal swimming and water lessons for years – and figuring out what worked best for our kiddo to feel joyful as she grew her skills in a pool or other body of water – has resulted in a lifetime’s worth of immensely positive aquatic experiences for our family. Not bad, considering we live in land-locked Ohio!

Swimming is not just a life-saving skill all children and adults should have. Being a strong swimmer at a young age is also key to unlocking many amazing, unforgettable and otherwise unattainable core memories and life experiences.

By age four, Z could go off the diving board at our community pool and swim back to the ladder on her own. She also delighted in racing down the biggest aqua slide anytime she could find a lifeguard who would let her through despite being slightly under the height requirement. (I’ve always felt access to those big slides should be based on swimming ability, not height – there are plenty of adults who cannot swim and shouldn’t go down!)

A snorkel and flippers were bathtime toys for us long before preschool-age Z ever got to use them in the sea. This built up her confidence in wearing and using them, as well as instilled a sense of fun and excitement as we talked about the wonders she would see when we put them on in a real ocean.

By age five, Zoe was able to comfortably swim and snorkel with us in the Pacific Ocean, seeing countless rainbow-colored fish and sea turtles beneath us in the warm, clear waters off Maui’s Ka’anapali coast. I will never forget hearing her excited squeals through her snorkel or feeling her little hand tap-tap-tap on my arm and then watching her point down at the reef so I’d be sure to see whatever fish or sea creature had her so enthralled.

Being a strong swimmer by age five also allowed Z to live out her lifelong dream of becoming a real mermaid when we got her a FinFun mermaid tail for her birthday. Swimming with a monofin is a physical challenge she was up for because she already had excellent skills in the water; it’s not something I would recommend for any child who isn’t already a strong swimmer.

We kept swim lessons going and by age seven, Zoe was snorkeling tirelessly by our side for hours in the crystal-clear waters of the Turks and Caicos. Her sharp eyes spotted many undersea wonders we never would have seen without her pointing them out! She also fearlessly jumped off the top of a catamaran into deeper parts of that same ocean – something even many adults were afraid to do.

On that same Turks and Caicos vacation with our 7-year-old mermaid, she also participated in many fun kids’ activities in the resort pools. After she lost a swim race, coming in second to a killer “swim team kid” who cut through the water like a shark, Z asked if she could join a swim team and learn to swim fast like they do.

That led to Z joining the DARTS summer swim team at age 8, which further strengthened her skills in the water and introduced her to the joys of diving as well.

Several summers on the swim and dive team, plus continuing indoor lessons during the winters as well, have made Z a stronger swimmer than I ever have been or will be. She is fearless in a pool, unstoppable in a lake and confident in the ocean as well.

And oh, the countless payoffs of being such a solid swimmer. Two summers ago, we were exploring the scenic area near Cuyahoga Valley National Park. We stumbled upon the Peninsula Quarry – a chill, old-school swimming hole that looks like a slice of heaven on a hot afternoon.

We didn’t have swimsuits with us (note to self: always pack swimsuits when going out adventuring in the summertime!), but Z begged to swim in a tank top and shorts. We said yes, she quickly and easily passed a swim test administered by a young lifeguard, and then she was able to jump into the swimming hole and swim across to a quarry wall crawling with climbing kids.

We watched nervously as she and the others climbed up a rock face only to plunge back into the water. She did it over and over again, shouting gleefully each time. I got some great pictures and videos.

As E and I watched from the shore, feeling a bit negligent for letting our 10-year-old swim out to the quarry diving cliff alone, we realized it was probably more fun that way. It was some serious Peter Pan and the Lost Boys-style fun and likely one of those summer core memories she will never, ever forget.

This past summer in Kauai, we happened upon a similar Neverland-inspired swimming hole at the Lumaha’i river, just off the gorgeous and wild Lumaha’i beach where swimming is prohibited because too many unwitting tourists have drowned.

Z asked me if she could swim across the river and climb up the rock wall on the far side to swing out, as many local kids and a few other tourists were doing. After watching for a while and deeming it safe enough, I said yes and she was gone in a flash. We all watched from the shore as our brave Z swam over, climbed up the rock cliff and whooped with joy as she swung out on a rope and splashed back down into the river.

That’s when my bro’s kids started asking if they could go, too; cousin Z had proven it was both safe and fun. The three of them all had a blast over on the diving cliff until the local kids moved on to bridge jumping. When Z asked to do that, I was very hesitant. Is it legal? Is it safe? But we watched enough kids and adults jump into the river from the bridge overpass that we realized it must be okay to do.

I somewhat reluctantly said yes, as did my bro, and the cousins walked over to the bridge. It took quite a while to work up the nerve – or maybe they were enjoying the company and good-natured ribbing of the local boys up on the ledge with them. I stood in the water near the shore and worried myself sick as only a mom can do while we waited for the girls to make up their minds and jump. Was this a mistake? Is there a current in this river? Is that bridge just too high? What if she gets hurt?

But soon enough, those brave girls jumped. The victorious look on Z’s beaming face when her head popped back up above the surface was enough to tell me it had been a good risk. The cousins did that bridge jump several more times each – and at least one time together – before we called it a day and headed back to our resort.

Again, talk about memories that will last a lifetime. You’ve been to Kauai, but have you bridge-jumped at Lumaha’i when you were just 12 years old?!

We checked another cool experience off our bucket list last year when Z and I swam in the waters beneath a powerful waterfall in Costa Rica. That was yet another amazing experience that would not have been possible without Z’s solid swimming abilities.

I can only imagine the ongoing adventures and fun we’ll have as our travels with the kiddo continue into her teens. Who knows what’s next for our little family? I just know that it will be a blast.

Have you experienced any cool swimming or diving adventures during your travels? I’d love to hear about them in the comments below or over on Facebook or Instagram. 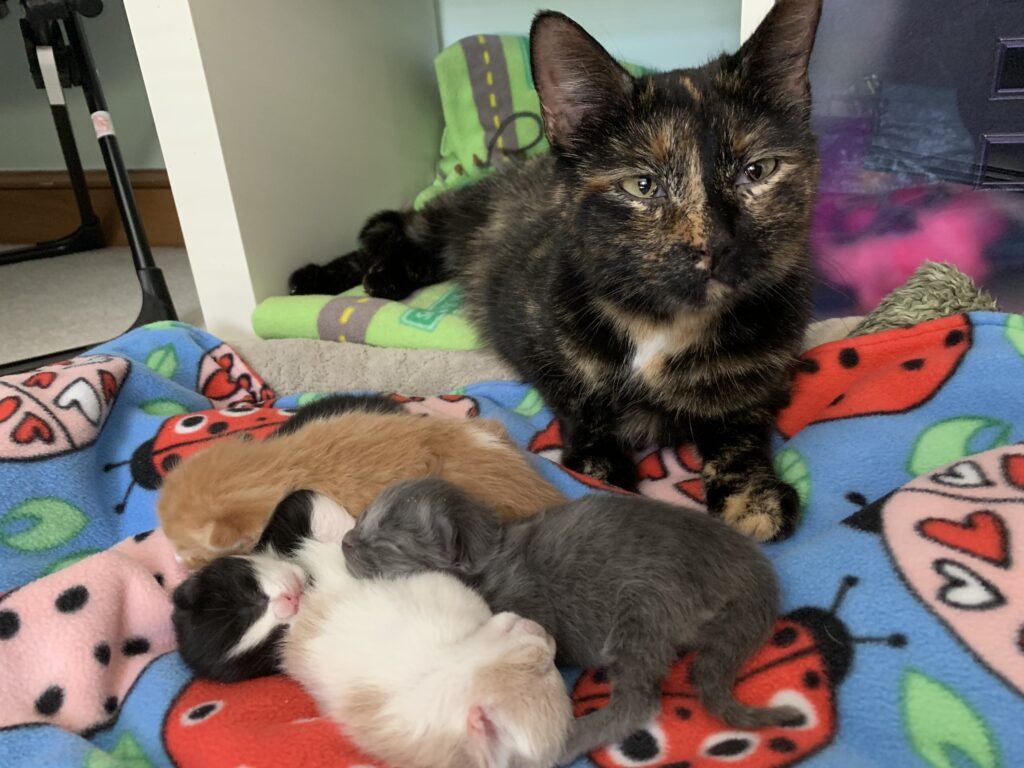 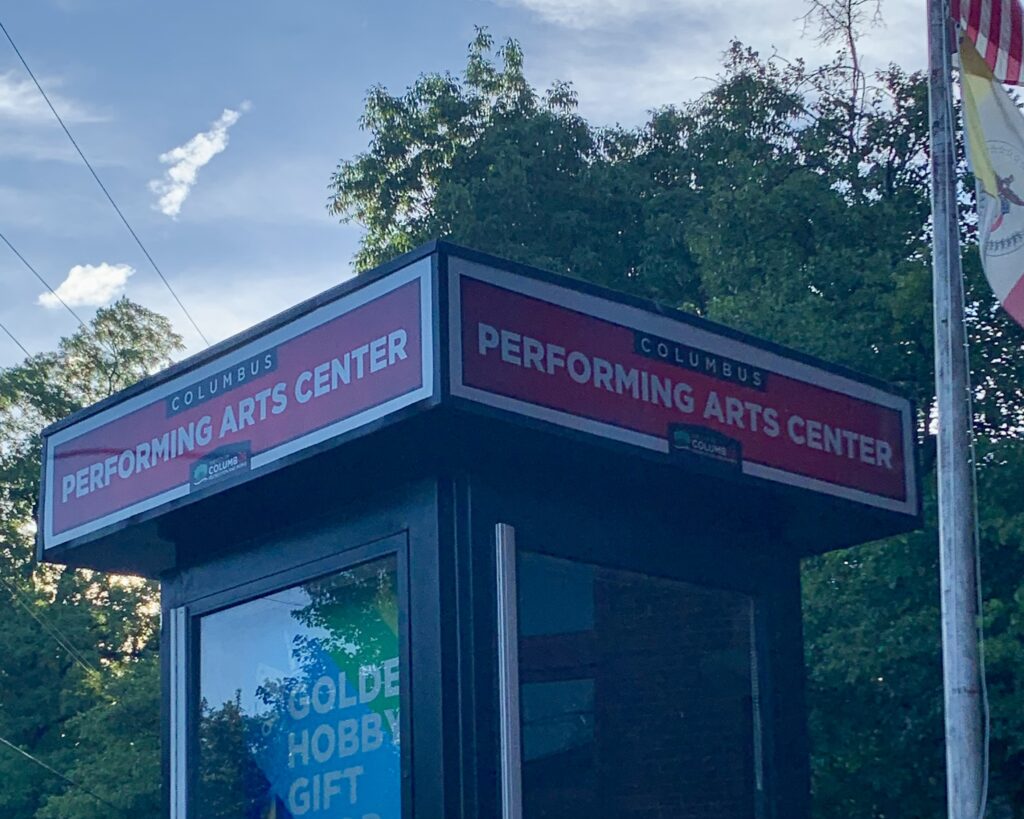